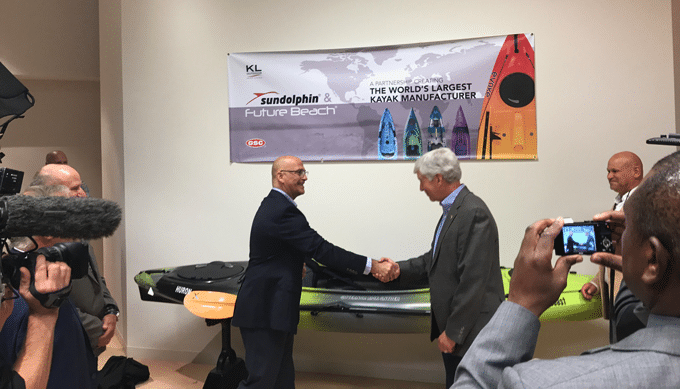 Governor Snyder praised KLO/GSC for its decision to establish its corporate headquarters and expand operations in the city of Muskegon. “KL Outdoor/GSC’s decision to establish its global headquarters and expand here rather than in another location means good jobs for Michigan residents and underscores the strength of the state’s manufacturing talent,” Snyder said. “KL Outdoor’s merger with Quebec-based GSC Technologies makes the company the largest kayak manufacturer in the world, and we can’t think of a better place for that company to be than right here in the Great Lakes State.”

The expansion of the KLO/GSC corporate headquarters will accommodate new growth resulting from the company merger and improved efficiencies, said New Water Capital partner Jason Neimark. The company chose the Michigan site over a competing site in Quebec, Canada. “The headquarters and plant expansion has received tremendous support from the state of Michigan and the local community,” Neimark said. “We have tremendous confidence that our investment in the state and in Muskegon will pay off for our company in a stronger, better-run operation and for the people of Michigan in jobs and economic growth.”

“We applaud KLO/GSC’s commitment to Michigan and look forward to working with the company as it continues to expand in the outdoor water sports market,” said Jeff Mason, CEO of the Michigan Economic Development Corporation (MEDC), which administers the MSF grant program. “With more than 11,000 inland lakes and more than 3,000 miles of Great Lakes coastline, Michigan is a natural fit for the largest paddle sports company in the world.”

The City of Muskegon also has pledged its support for the project with a 12-year tax abatement, valued at $69,000. Workforce development agency West Michigan Works! has offered hiring and training assistance. Individuals interested in careers with KLO Holdings should visit http://kloutdoor.com/.

Muskegon Area First worked with the merged company in collaboration with the MEDC to support KLO/GSC in expanding locally rather than relocating to another state or country. “The company’s 30+ year history, combined with a great workforce and ideal coastal location on Lake Michigan made this the perfect choice for the company’s headquarters” said Ed Garner, president and CEO at Muskegon Area First.

“KL has strategically grown into a world leader in design and production of outdoor recreational products, and it’s fitting that their home will continue to be in one of Michigan’s premier waterfront communities, on the shores of Muskegon Lake and just a stone’s throw from Lake Michigan,” said Muskegon Mayor Steve Gawron.

Smith expressed appreciation for the state and local support for the corporate expansion project. “Local and state leadership has continuously demonstrated commitment and support of our mutual interests and growing partnership,” he said. “We are extremely excited about the short and long-term prospects for this combined enterprise, which will continue to benefit from the fast-growing paddle sports business. We are also excited to continue to call Muskegon home and anticipate the office move to the lakeshore site to be a great benefit to our dedicated employees.”

New Water Capital, L.P. is a private equity firm focused on lower-middle market companies in transition, in the consumer, retail and industrial manufacturing and services sectors, with revenues of $30 million to $300 million. New Water Capital’s collaborative transaction and operating model is built specifically to support companies in transition, building on their unique cultures and strengths. For more information, please visit www.newwatercap.com.